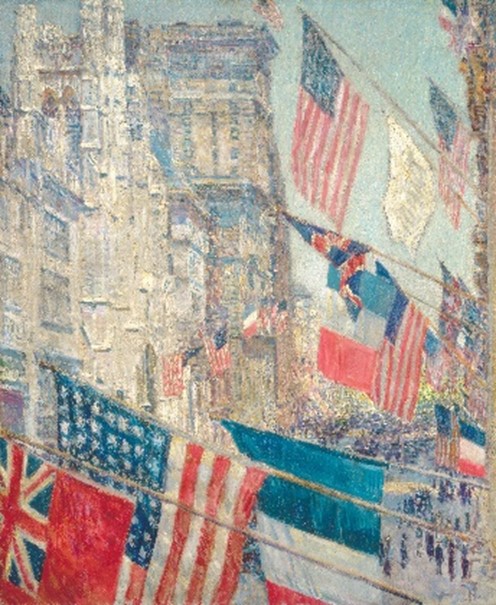 One month after the United States officially entered the First World War, the city of New York festooned Fifth Avenue with flags. As a welcoming gesture to the British and French war commissioners, the Stars and Stripes hung alongside the Union Jack and the French Tricolor to create a patriotic pattern of red, white, and blue. Childe Hassam, an American of British descent who had studied and worked in Paris, took personal pride in the military alliance.

Have the students describe the brushstrokes in this painting.

Ask students to find the church tower.
Where are the trees in Central Park?
What is happening in the street?

Have students look at street and satellite maps of New York to see where Hassam was when he painted this and how this view has changed.

Where are the shadows and what color are they?

Which flag in the middle ground stands alone and it is not overlapped by another flag?

What international event was happening when this was painted?
Why were so many flags flying in New York City on this day?

What do these flags flying together symbolize?
What elements do the flags have in common?

What does this painting show about America’s spirit in 1917?

This painting is dominated by red and blue tones, representing the Flag of the United States. Several dark figures in the middle-distance hold umbrellas, the far distance fading into the blue background. The flags seem to float in mid-air, hanging from poles that project from unseen buildings. The images are reflected on the wet street and sidewalk. Hassam may have been influenced by two similar works of Claude Monet depicting national celebrations in Paris on June 30, 1878.

The work was donated to the White House in 1963 by Thomas Mellon Evans and hung between the windows in John F. Kennedy’s blue-themed President’s Bedroom (now a private sitting room, adjacent to the Yellow Oval Room on the second floor). It was in the President’s Dining Room for many years and hung in the Oval Office during Bill Clinton’s, Barack Obama’s, and Donald Trump’s terms, as well as currently under Joe Biden’s term.