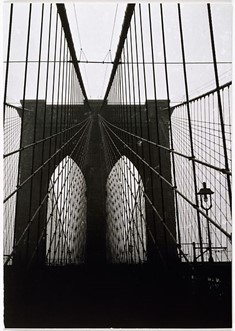 When the Brooklyn Bridge opened to traffic in 1883, it was the largest suspension bridge in the world, and its towers were the tallest structures in the Western Hemisphere. As the years went by, that triumph of engineering and architecture began to lose its power to inspire awe. By 1929, when Walker Evans began to photograph it, the bridge had settled into the unexciting link between the New York boroughs of Brooklyn and Manhattan; it was hardly even noticed by the harried commuters who crossed it every day. Evan’s gift was to perceive something familiar as if it had never been seen before and therefore to restore the Brooklyn Bridge’s original wonder.

TEACHING ACTIVITIES
Encourage students to look closely at this photograph, paying attention to the directions of the bridge and cable lines.

Ask students if they would recognize the image in this photograph as a bridge if it were not titled. Is this the shape they visualize when they think of a bridge?
Why? Why not?
When most artists create a picture of a bridge, what view do they show of it?
Where was the camera when this photograph was taken?
Watch the other paintings and pictures of the Brooklyn Bridge so you can understand the unusual viewpoint of this photograph.

Have students locate the point to which all the cable lines seem to lead.
Is this point centered in the photograph?
Is the balance in this picture symmetrical or asymmetrical?

Evans wanted his photographs to show the national character of America. How does this photograph satisfy his aim?

Until the late nineteenth and early twentieth centuries, photography was primarily a means of documentation and was not considered art. The photographer who took this picture considered photography to be an art form. Do you agree with him? Use this photograph to support your reasoning.

Evans used a modern medium (photography) to create a modern image of a famous structure. When he had studied art in Paris, he saw modern European art that featured abstract, simplified forms. How is this photograph like abstract modern art? 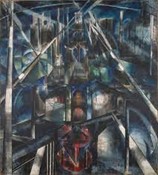 To Joseph Stella and other progressive artists of the early twentieth century, the timeworn conventions of European painting seemed powerless to convey the dynamism of modern life. An Italian immigrant, Stella arrived in New York City at a time of unprecedent urban growth and social change in America. He first encountered the new approaches of modernist painting on a trip to Paris and took particular interest in Futurism, an Italian movement that claimed to be “violently revolutionary” in its opposition to the traditions that had prevailed in art ever since the Renaissance. Upon returning to the United States, Stella himself converted to Futurism, convinced that only its new vision of reality could capture the complexities of the machine age.

TEACHING ACTIVITIES
Encourage students to study this painting closely and see if they recognize any objects.

What time of day is it?
Are there any cars on the bridge?

Watch the painting upside down. Does the picture seem top heavy or bottom heavy? Why?
What are the thin upright forms at the top?
Do some objects seem close and others far away? Why?

How does Stella suggest the complexity of the modern machine era? How has he indicated its dynamic movement?
Have students identify some vertical lines in this painting. How do they affect the dynamics of the composition?

Encourage students to imagine what Stella heard as he stood on this bridge at night.

What do you think Stella found fascinating about this bridge at night? 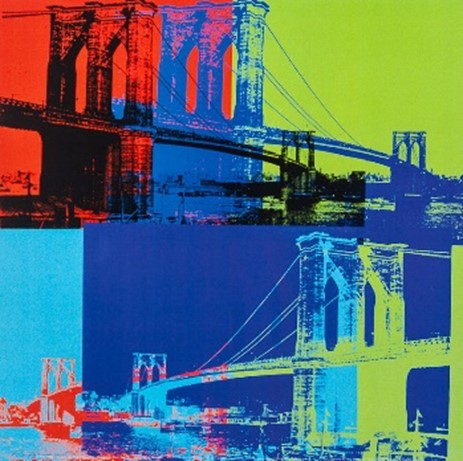 Andy Warhol was a successful magazine and ad illustrator who became a leading artist of the 1960s Pop art movements. He ventured into a wide variety of art forms, including performance art, filmmaking, video installations and writing and controversially blurred the lines between fine art and mainstream aesthetics. Warhol died on February 22, 1987, in New York City. Warhol liked to use bright colors and silk-screening techniques. He liked using screen printing to mass-produce artworks based on photographs of celebrities. 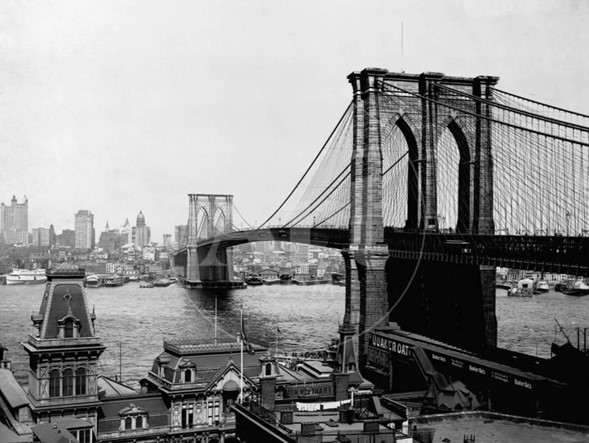