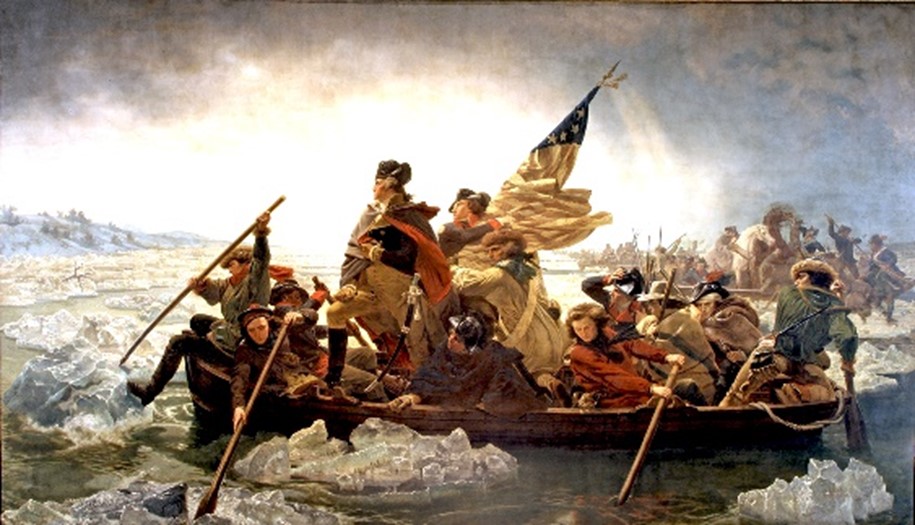 In Emanuel Leutze’s painting, the commander of the Continental Army against Great Britain stands boldly near the prow of a crowded boat and navigates the treacherous Delaware River on Christmas night, 1776. The Declaration of Independence had been signed earlier that year in the summer heat of Philadelphia, and through the sobering autumn months General Washington led an army of dwindling numbers, with defeats mounting and morale sinking.

Encourage students to let their eyes travel around and into the background of this painting.

Describe and analyze
Ask the students to compare the size of this twelve by twenty-one foot painting with something in the classroom, such as a wall. Explain that the figures in this painting are almost life-size.

Have students describe the men’s clothing. Explain that they wear a variety of hats and shirts representative of their regions.

Ask students how Leutze emphasized Washington and the American flag.
Most of the colors in this painting are muted blues, grays, and browns. What bright color did Leutze include?
In what part of the picture is this red located?
Why do you think he used red only in Washington’s boat?

Ask students to describe how Leutze created an illusion of great distance in this painting.

Interpret
Have students describe the weather and water conditions. Why isn’t it an ideal day for boating?
Why would anyone want to cross the Delaware River in this weather?

Ask students to describe the flag. Even though it is knotted and wrinkled by the wind, ask them to find symbols that appear on today’s flag.

Ask students if Washington’s boat seems stable to them.
Why do you think Leutze shows a smaller boat in this painting?

After Japan attacked Pearl Harbor on December 7, 1941, America was soon bustling to marshal its forces on the home front as well as abroad. Norman Rockwell, already well known as an illustrator for one of the country’s most popular magazines, The Saturday Evening Post, had created the affable, gangly character of Willie Gillis for the magazine’s cover, and Post readers eagerly followed Willie as he developed from boy to man during the tenure of his imaginary military service. Rockwell considered himself the heir of the great illustrators who left their mark during World War I, and, like them, he wanted to contribute something substantial to his country.

Ask students what these people are doing.
Have students find the words TOWN and REPORT.
Where might these people be?
Ask students to describe the expression on the speaker’s face.
Ask students to describe the texture and patterns of the standing man clothes and hands. Have them compared his hands and clothing to that of the other men. What do their hands and clothing suggest about their professions and financial status?
In what ways does this scene seem real?
Who is attending this meeting?
Who is the youngest man? How do you know?
Describe the reaction of the other people in this scene to the speaker.
How did Rockwell emphasize the speaker?

Encourage students to imagine what the speaker might be saying. Discuss recent town meetings or hearings in your community where citizens voiced their opinions.

What is the paper in the speaker’s pocket?
Because the men in this scene have town reports, what does Rockwell assume about Americans and their form of government?
What inspired this painting?
Explain why this scene shows an American freedom. Why did Americans believe there was a connection between this image and World War II?